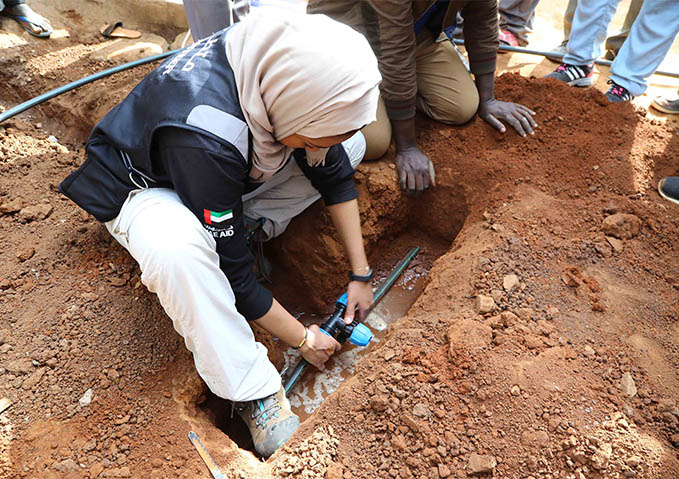 Since its launch five years ago by HH Sheikh Mohammed bin Rashid Al Maktoum, Vice President and Prime Minister of the UAE and Ruler of Dubai, UAE Water Aid (Suqia) has played a pivotal role in institutionalising humanitarianism. It has also affirmed the UAE as a sustainable capital for humanitarian work and as one of the largest donors in the world. Suqia operates under the umbrella of the Mohammed bin Rashid Al Maktoum Global Initiatives. It has managed to reach over 13 million people in 36 countries and has implemented over 1,000 sustainable water projects around the world, in partnership with its strategic partners. These include Dubai Electricity and Water Authority (DEWA), Emirates Red Crescent, the Mohammed bin Rashid Al Maktoum Humanitarian and Charity Establishment, and the Dar Al Ber Society.

HE Saeed Mohammed Al Tayer, Chairman of the Board of Trustees at Suqia, said that since its launch in 2015, Suqia has proved its influence and support to the UAE as a beacon for humanity and an oasis for humanitarian work. It has also shown the UAE’s efforts to follow the approach of the late Founding Father Sheikh Zayed bin Sultan Al Nahyan, and the directives of wise leadership of HH Sheikh Khalifa bin Zayed Al Nahyan, President of the UAE; HH Sheikh Mohammed bin Rashid Al Maktoum; and HH Sheikh Mohamed bin Zayed Al Nahyan, Crown Prince of Abu Dhabi and Deputy Supreme Commander of the UAE Armed Forces, to extend a helping hand to the needy all over the world, regardless of their race, colour, religion, or culture.

“We work in line with the vision and words of His Highness Sheikh Mohammed bin Rashid Al Maktoum, who said, “The UAE is not merely a financial or economic centre, nor is it only a tourist destination between East and West, but an important humanitarian centre on the international stage.” Suqia supports local and international organisations who help the needy and provide safe drinking water to communities suffering from water scarcity and pollution. On this year ‘2020: Towards the Next 50’, we are increasing our efforts in the upcoming years to provide clean water for the afflicted around the world. This achieves the UN Sustainable Development Goals and spreads benevolence to all mankind,” said Al Tayer.

In 2014, HH Sheikh Mohammed bin Rashid Al Maktoum launched the UAE Water Aid initiative to provide clean water to five million people around the world. The initiative achieved impressive success in collaboration with Emirates Red Crescent and exceeded its targets by collecting enough aid to provide clean drinking water for over 7 million people around the world. Following this successful initiative, His Highness established the UAE Water Aid Foundation as a non-profit organisation by law in March 2015 under the umbrella of the Mohammed bin Rashid Al Maktoum Global Initiatives. Suqia’s main focus is the search for, and development of, solutions to water scarcity; to help communities that suffer from water scarcity and pollution by providing them with potable water.

Suqia and the Mohammed bin Rashid Al Maktoum Humanitarian and Charity Establishment signed an MoU to support the objectives of both organisations to work on sustainable development projects that provide clean water around the world.

On its first year, Suqia launched its annual Ramadan campaign and distributed over 2.5 million packs of bottled drinking water to those fasting in the UAE, via local charities and NGOs. It also sent over 1.2 million packs of water to people affected in Yemen, in cooperation with the Ministry of Foreign Affairs and International Cooperation.

Suqia also took the responsibility of improving the situation for disadvantaged communities and improving their quality of life. This stems from its understanding both how important water is to achieving economic and social development, and the impact of water scarcity on 40% of the world’s population. Suqia focused on projects that improved the comfort, prosperity and empowerment of women in developing countries to pursue their education and take care of their families. This alleviates women’s suffering, as they have to walk long distances to provide water for their families. This leads to severe health problems, and other problems.

The partnership between Suqia UAE, DEWA, and the Mohammed bin Rashid Al Maktoum Humanitarian and Charity Establishment resulted in a group of projects and initiatives to provide clean and safe drinking water to communities around the world. These included launching a volunteering campaign for youth to implement sustainable developmental and operational projects in many countries to help children and women increase their family income by creating new job opportunities.

Suqia won the UAE Innovation Award for Humanitarian Aid, when it took part in the 13th Dubai International Humanitarian Aid and Development Conference and Exhibition (DIHAD), for its initiatives and continuous efforts in humanitarian and development aid. Suqia also won first place, for its water desalination Reverse Osmosis unit, from the Carbon Ambassador Programme; launched by DEWA with the support of the UN Development Programme and in collaboration with the Dubai Carbon Centre of Excellence. This happened while it took part in the 18th Water, Energy, Technology and Environment Exhibition (WETEX 2016).

The benevolence of UAE citizens and residents contributed to the success of the annual Ramadan campaign to continue providing water for fasting people.

In 2017, Suqia UAE signed an MoU with the Dar Al Ber Society to increase strategic relations, consolidate mutual collaboration, and exchange knowledge and skills. This integrates strategic partnerships between all organisations in Dubai and the UAE.

Suqia continued its local Ramadan campaign and distributed water in mosques and Iftar tents in different Emirates across the UAE, in collaboration with 13 local charities.

During the Year of Zayed, Suqia dedicated initiatives to raise awareness of the journey of the late Founding Father Sheikh Zayed, may his soul rest in peace, and his achievements and position to commemorate his personality, principles, values, and heritage. Suqia completed six local and international initiatives based on a carefully studied strategy. This strategy focuses on sustainability, protecting the environment and natural resources, and promoting the worthy values Sheikh Zayed instilled in his sons by giving and extending a helping hand to the needy and afflicted everywhere. These initiatives included the 100 Volunteers Initiative; 100 Letters to Zayed; 100 Water Projects; 100 Water Endowments; and other international initiatives.

The Year of Zayed also saw the expansion of the local Ramadan campaign to go outside the UAE for the first time. Suqia Zayed’s initiative reached 13 countries around the world in collaboration with the Mohammed bin Rashid Al Maktoum Humanitarian and Charity Establishment.

Suqia UAE’s initiatives in 2019 supported several campaigns and initiatives to provide drinking water. These included ‘From the UAE for Rohingya Children and Women’ campaign, under the directives of HH Sheikh Khalifa bin Zayed Al Nahyan. Suqia also helped to make the campaign successful. During the holy month of Ramadan and especially on Zayed Humanitarian Day, Suqia helped people fasting in the UAE and abroad. This underlines the values of giving and charity, which are key principles of the UAE’s mission. The Zayed Humanitarian Day is an opportunity to remember the achievements and impact of the pioneer of humanitarianism, Sheikh Zayed bin Sultan Al Nahyan, may his soul rest in peace. His major initiatives improved the lives of millions around the world. UAE Water Aid supported the Special Olympics World Games Abu Dhabi 2019, in collaboration with Mai Dubai.

In the same year, Suqia launched the second Mohammed bin Rashid Al Maktoum Global Water Awards, building on the success of the first round.

As part of its annual Ramadan campaign, Suqia participated in the ‘10 Million Meals Campaign,’ launched by the wife of His Highness Sheikh Mohammed bin Rashid Al Maktoum, Her Highness Sheikha Hind bint Maktoum bin Juma Al Maktoum, Chairperson of the UAE Food Bank. The campaign is under the umbrella of the Mohammed bin Rashid Al Maktoum Global Initiatives to help people in need and mitigate the consequences of the COVID-19 outbreak around the world. Suqia provided 10 million water bottles worth AED 5 million.

Suqia and Dubai Cares signed an MoU to exchange knowledge and raise their abilities to support developing countries that suffer from water scarcity. As part of this MoU, Suqia supports Dubai Cares to provide water, sanitation and hygiene for schools in two of Madagascar's largest cities: Antananarivo and Mahajanga. About 14,250 children and 33,750 local individuals will benefit from this programme.