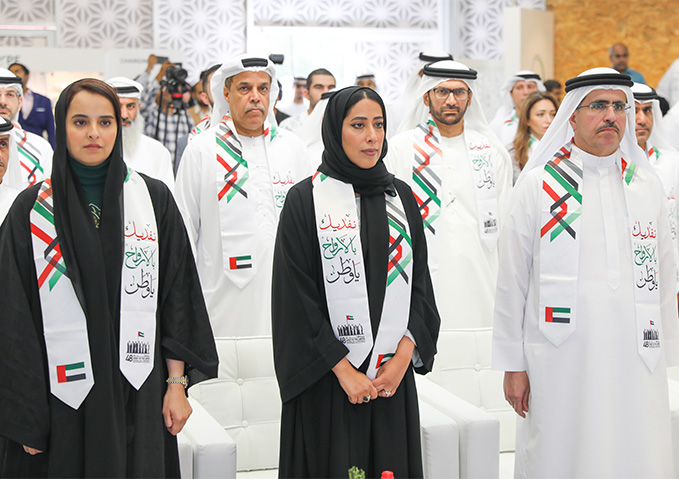 Dubai Electricity and Water Authority (DEWA) has proudly celebrated the 48th UAE National Day. HE Saeed Mohammed Al Tayer, MD & CEO of DEWA, HE Mona Al Marri, Director General of the Government of Dubai Media Office, DEWA’s Executive Vice Presidents, Vice Presidents, staff, and a number of customers were present. DEWA staff stated their loyalty to the wise leadership while continuing their hard work, inspired by the Spirit of the Union and praying to God to continue to bless the UAE with safety and security.

“The second of December symbolises the determination and dedication to build a nation that provides well-being and happiness for its citizens, residents, and visitors. On this day in 1971, the late Sheikh Zayed bin Sultan Al Nahyan and the late Sheikh Rashid bin Saeed Al Maktoum, may their souls rest in peace, established the foundations of the Union of the United Arab Emirates. This was the beginning of the UAE’s comprehensive development. Our wise leadership has continued the success and excellence journey. The experience of the UAE has become a source of inspiration to other countries and peoples in the region and around the world. The UAE has also become an example of excellence and prosperity. It is anticipating and shaping the future; and leads in many global indicators,” added Al Tayer.

“While we are proud of all the UAE’s achievements, we are especially proud that DEWA is part of them, with global accomplishments that surpass the world’s largest utilities. I would like to point out that the UAE, represented by DEWA, is first for the third consecutive year for getting electricity in the World Bank's Doing Business 2020 report, which measures the ease of doing business in 190 economies around the world,” said Al Tayer.

“We celebrate the National Day this year during the Year of Tolerance, which embodies the UAE’s approach to promote the principles of tolerance, love, and giving. Our Founding Fathers instilled these values in the hearts of citizens and residents of the UAE, and have flourished under our wise leadership who have turned the UAE to an oasis of happiness, prosperity, security, and safety, where everyone lives in harmony. The UAE has become a unique role model in the world for peace, co-existence, fraternity, and solidarity. On National Day, we thank God for our wise leadership, who spare no efforts for the advancement of the UAE and the welfare and happiness for its citizens and residents. We renew our pledge to them to continue our work to repay our generous country, maintain our nation’s lead, and continue the UAE’s progress to becoming the best country in the world. We are inspired by the Spirit of the Union as the driving force for hard honest work to ensure that the UAE flag continues to fly,” concluded Al Tayer.

DEWA’s celebrations of the 48th National Day focused on national identity, loyalty and belonging to the Union. Celebrations featured a poetry session by Emirati poets Musabah bin Ali Al Kaabi, Hamda Al Mur Al Mehairi, Saif bin Salem Al Mansouri, and Saudi poet Fahd Al Shahrani. The audience enjoyed traditional performances by the Emirati Al Harbiya and Saudi Al Ardah traditional bands. Celebrations took place outside the head office, which was decorated with the UAE flag’s colours, with many traditional and local activities such as traditional games of Tilah (marbles) and fishing. Traditional Emirati foods and food trucks were also available. There was also a henna corner, and an instant digital photo booth with an Emirati heritage backdrop. DEWA also has a dedicated intranet page covering all the features of UAE National Day, including competitions and prizes. DEWA also organised other activities at its facilities in Jebel Ali, Al Hudaiba, the Sustainable Building in Al Quoz, and Warsan.