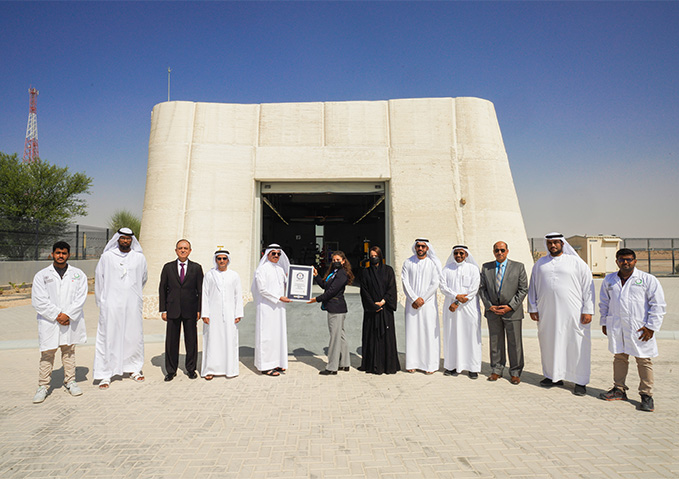 Dubai Electricity and Water Authority (DEWA) has marked another breakthrough by achieving the Guinness World Records title for the first 3D-printed laboratory in the world. The record was awarded for DEWA’s Robotics & Drone laboratory, housed within the Research & Development (R&D) Centre at the Mohammed bin Rashid Al Maktoum Solar Park. HE Saeed Mohammed Al Tayer, MD & CEO of DEWA, received the certificate from representatives of Guinness World Records.

“At DEWA, we are guided by the vision and directives of His Highness Sheikh Mohammed bin Rashid Al Maktoum, Vice President and Prime Minister of the UAE and Ruler of Dubai, to promote innovation and adopt the latest Fourth Industrial Revolution technologies, including 3D printing. Our efforts in this regard support the Dubai 3D Printing Strategy launched by His Highness, which aims to exploit this promising technology for the service of humanity and promote the status of the UAE and Dubai as a leading hub for this technology by 2030. DEWA’s Robotics and Drone laboratory is the first building in the UAE to be fully printed onsite, and the first such 3D-printed lab in the world,” said Al Tayer

“As a member of the 3D Printing Strategic Alliance, launched by His Highness Sheikh Hamdan bin Mohammed bin Rashid Al Maktoum, Crown Prince of Dubai, Chairman of the Executive Council of Dubai, and Chairman of the Board of Trustees of Dubai Future Foundation, to accelerate the adoption and utilisation of this technology to support the government, economic, health and scientific sectors, DEWA invests in 3D printing as an innovative solution for building prototypes and spare parts for the production, transportation, and distribution divisions,” added Al Tayer.

Al Tayer emphasised that Dubai provides a motivational environment to encourage construction in 3D printing and attract leading companies in this field. He noted that 3D printing in construction reduces time and cost, thus advancing the economy and protecting the environment by reducing conventional construction waste.

Waleed Bin Salman, Executive Vice President of Business Development and Excellence Sector at DEWA, pointed out that DEWA’s R&D Centre at the Solar Park supports 3D printing to produce equipment capable of withstanding high temperatures and harsh climates. DEWA is the first organisation in the GCC to deploy Markforged Metalx 3D printing based on wire/filament. This technology is highly accurate; reduces time and cost, improves efficiency, productivity and enhances innovation.