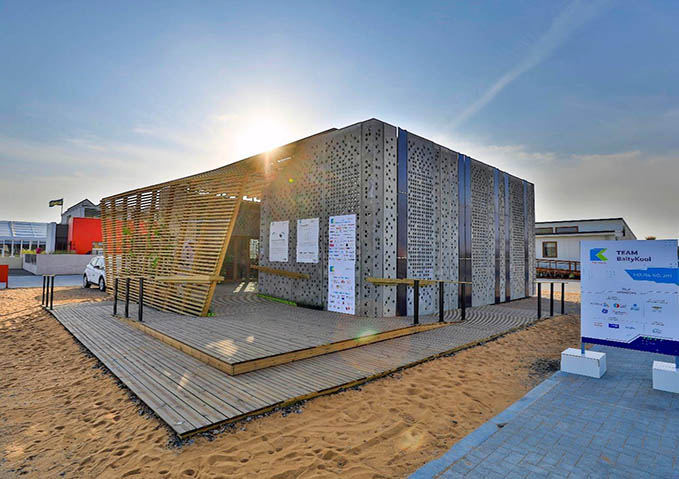 The Solar Decathlon Middle East (SDME) organised by Dubai Electricity & Water Authority (DEWA) supports Dubai's ambitions to reach first place worldwide and maintain a globally leading position in sustainability, competitiveness and green economy. This is by implementing some of the winning entries of the first SDME in several properties in Dubai. SDME is a partnership between DEWA and the Dubai Supreme Council of Energy with the US Department of Energy.

As an example of DEWA’s efforts to achieve sustainability, the BaityKool team from the University of Bordeaux, which won third place at the first SDME, has started implementing the university's sustainable smart house at a prestigious property in Dubai.

HE Saeed Mohammed Al Tayer, MD & CEO of DEWA, highlighted the role of competition in supporting sustainability, limit carbon emissions, preserving the environment, and encouraging creativity and innovation. This supports the Dubai 2040 Urban Master Plan, launched by HH Sheikh Mohammed bin Rashid Al Maktoum, Vice President and Prime Minister of the UAE and Ruler of Dubai, which outlines an integrated roadmap for urban development based on sustainable development to make Dubai the world's best place to live. It consolidates the UAE and Dubai's position as a hub for creativity and innovation as well as an incubator for innovators. The competition helps participants develop innovative solutions that fight climate change and engage youth in sustainable development.

"After two years of the first SDME, which DEWA organised for the first time in the Middle East and Africa in 2018, we are pleased to witness the development of creative projects participating in the competition and implementing one of the winning designs in several sustainable properties in Dubai. The SDME is organised by DEWA under the patronage of His Highness Sheikh Hamdan bin Mohammed bin Rashid Al Maktoum, Crown Prince of Dubai and Chairman of the Executive Council. Hosting two consecutive rounds of the SDME with total prizes of over AED 20 million and enabling youth to create and innovate underlines Dubai's position as a futuristic city that adopts sustainable solutions. This achieves the vision of His Highness Sheikh Mohammed bin Rashid Al Maktoum, to support innovation and enable youth to unleash their potential for creativity," said Al Tayer.

"BaityKool is now integrated into Dubai to test its innovations in a living-lab approach involving students, professors and professionals of sustainable construction. After SDME 2018, this is a great opportunity to demonstrate the originality of our technologies and better than Net-Zero-Energy performance in a real residential situation," said Philippe Lagiere, coordinator for the University of Bordeaux.

The BaityKool team from the University of Bordeaux, France; the National School of Architecture and Landscaping of Bordeaux (ENSAPBx), France; Arts et Métiers Paris Tech Bordeaux (ENSAM), France; Nobatek/Inef4 France; Amity University in Dubai, UAE, and An-Najah University in Palestine collaborated on the smart house during the first SDME. They came up with an innovative project for a sustainable home, using natural cooling technologies and radiative cooling in addition to producing food at home using aquaponics. The home exteriors are inspired by the 'mashrabiya' designs seen in the Middle East. DEWA is organising the second SDME in conjunction with Expo 2020 Dubai.