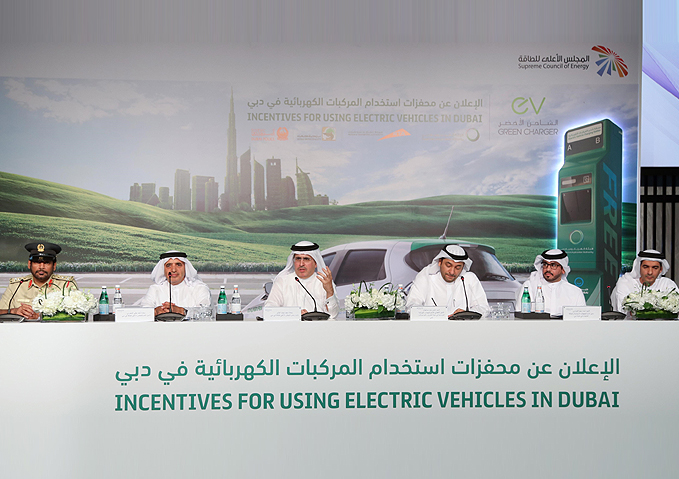 The Dubai Supreme Council of Energy has announced incentives to encourage community members to use electric and hybrid vehicles, and promote the use of sustainable transport, which will have a lower average annual energy consumption rate. The announcement was made at a press conference held at the Armani hotel, Dubai, attended by HE Saeed Mohammed Al Tayer, Vice Chairman of the Supreme Council of Energy and MD&CEO of Dubai Electricity and Water Authority (DEWA).

“I am happy to be with you today at the press conference to announce incentives to promote electric vehicles in Dubai. This supports the vision of His Highness Sheikh Mohammed bin Rashid Al Maktoum, Vice President and Prime Minister of the UAE and Ruler of Dubai, and the UAE National Agenda leading to the UAE Vision 2021 to create a sustainable environment for air quality, conserve water resources, increase clean energy and green development, and the objectives of the Dubai Plan 2021, to make Dubai a smart, sustainable and innovative city in managing its resources, improving its quality of life, and consolidating its position as a global model for green economy. Under the directives of our wise leadership, who made sustainability a key priority, the Dubai Supreme Council of Energy launched the Dubai Green Mobility Initiative to motivate organisations, under its umbrella to use sustainable transport, such as hybrid and electric vehicles, and to contribute to the sustainable development of the Emirate by reducing carbon emissions in ground transport, which is the second-largest greenhouse gas emitter in Dubai,” said Al Tayer.

“The Supreme Council of Energy issued directive number 1 of 2016 to set a target for government institutions. Therefore, at least 10% of all newly-purchased cars will be electric or hybrid from 2016 to 2020. The proportion of electric and hybrid cars will rise to 2% by 2020, and 10% by 2030. Under the umbrella of the Supreme Council, Dubai Electricity and Water Authority (DEWA) is working on implementing the Dubai Green Mobility Initiative to promote the use of electric and hybrid vehicles. This supports the Dubai Clean Energy Strategy 2050, for Dubai to have the lowest carbon footprint in the world by 2050, and the Dubai Carbon Abatement Strategy to cut carbon emissions by 16% by 2021,” added Al Tayer.

“In support of the Smart Dubai initiative, to make Dubai the smartest and happiest city in the world, and according to DEWA’s vision to become a sustainable innovative world-class utility, DEWA launched the Green Charger initiative in 2014, to build the infrastructure for electric vehicle charging stations all over Dubai. This works to promote Dubai’s environmental, social and economic development as a strategic goal by launching initiatives, programmes and projects that contribute to efforts to reduce the carbon footprint and protect the environment in Dubai,” noted Al Tayer.

“During the second quarter of 2014, DEWA began implementing the Green Charger initiative, which included the installation of 100 charging stations. This stage was successfully completed by the end of 2015, in coordination with the relevant parties, including the public and private sectors. DEWA is currently working on installing 100 more charging stations to bring the total number to 200 in 2018. Dubai Government has set the tariff for charging electric vehicles by Green Chargers at a cost price of 29 fils per kilowatt. This is a significant saving, compared to fuel-powered cars. Due to these efforts, the electric car sector has grown by about 30% between 2014 and 2016.”

“Today, I am pleased to announce that Dubai Electricity and Water Authority (DEWA) and the Road and Transport Authority (RTA) will provide incentives to encourage the public use of electric vehicles in Dubai, to help protect the environment,” said Al Tayer.

“As an incentive, DEWA’s registered users will be able to have their electric vehicles charged by DEWA’s Green Charger electric vehicle charging stations, completely free. This incentive will last until the end of 2019. This will be exclusive to public charging stations, and does not include home charging stations. The RTA will also provide incentives for electric vehicles, including free assigned parking, exemption from RTA electric vehicle registration and renewal fees, exemption from Salik’s tag fee, and arranging a special sticker for number plates. This is based on the plans and programmes we have implemented, and the strategy to encourage customers to use electric cars and hybrid vehicles, and promote the use of sustainable transport, which will lead to a reduced annual energy consumption rate,” concluded Al Tayer.