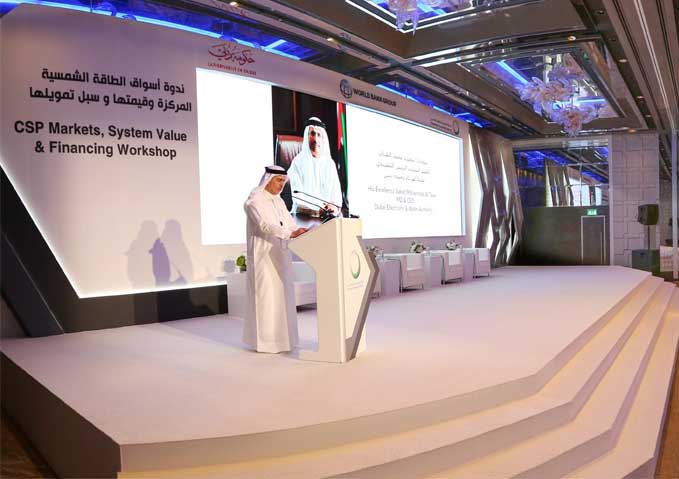 Dubai Electricity & Water Authority (DEWA) and the World Bank Group co-host a workshop on Concentrated Solar Power (CSP) Markets, System Value, and Financing. This is part of the World Bank’s Clean Technology Fund (CTF)-supported MENA CSP Knowledge and Innovation Programme (KIP). The workshop explains how Dubai is successfully integrating CSP into its power system at a market-changing drop in price. Participants exchange expertise and best practices related to CSP technologies and financing, and how it contributes to greening energy systems alongside other renewables.

HE Saeed Mohammad Al Tayer, MD & CEO of DEWA, has today inaugurated the workshop at Hyatt Regency Dubai Creek Heights hotel. HE Ahmed Buti Al Muhairbi, Secretary General of the Dubai Supreme Council of Energy, Erik Fernstrom, Energy and Extractives Global Practice Manager at the World Bank, and DEWA’s Executive Vice Presidents and Vice Presidents were present. The workshop was also attended by officials from the World Bank, experts and specialists, and representatives of utilities, developers, and investors from around the world.

In his keynote speech, Al Tayer thanked the World Bank Group for organising this workshop in Dubai.

“I am pleased that Dubai Electricity and Water Authority is co-hosting this workshop to share knowledge, experiences, and lessons learnt over the past years, which have contributed to strengthening the position of Dubai and the UAE as a global hub for clean energy and green economy. This is the result of the vision of our wise leadership, who realised early on the importance of achieving a balance between development and the environment by focusing on renewable energy, despite the UAE having one of the largest oil reserves in the world,” said Al Tayer.

“The main challenges to implementing clean energy strategies are: funds and prices, the efficiency and intermittency of renewable energy, regulatory and legislative frameworks, engagement with the private sector, and capacity building. In Dubai, we have dealt with these challenges through the Dubai Clean Energy Strategy 2050 to provide 75% of Dubai’s total power output from clean energy by 2050, and its 5 main pillars of infrastructure, legislation, funding, building capacities and skills, and an environmentally-friendly energy mix,” noted Al Tayer.

“Meeting the strategy’s target requires a capacity of 42,000MW of clean and renewable energy by 2050. We are working to achieve this by building major photovoltaic and Concentrated Solar Power projects at the Mohammed bin Rashid Al Maktoum Solar Park. This is the largest single-site solar park in the world, with a planned capacity of 5,000MW by 2030, with a total of AED 50 billion in investments. The first two phases are already operational, generating 213MW from photovoltaic technology. The 800MW photovoltaic third phase and the 700MW CSP fourth phase are currently under construction. The AED14.2 billion fourth phase is the largest single-site CSP project in the world and will feature the world’s highest solar tower, reaching 260 metres. The project was awarded to a consortium led by Saudi Arabia’s ACWA Power and China’s Shanghai Electric. The project will be commissioned in stages, starting from Q4 of 2020.”

“In Dubai, we have a holistic approach to the energy sector that has contributed to the UAE, represented by DEWA, being ranked first in the world for getting electricity according to the World Bank’s Doing Business 2018 report. In 2017, DEWA achieved the lowest Customer Minutes Lost (CML) worldwide at 2.68 minutes. The major projects launched by DEWA have contributed to reducing the cost of solar projects globally. We received a globally-competitive price of 2.99 USD cents per kW/h for the photovoltaic third phase of the solar park, and 7.3 USD cents per kW/h for the CSP fourth phase. Currently, DEWA has over 4,000MW of IPP projects underway, in partnership with the private sector, with a total investment of AED30 billion. This model has attracted external investments totalling AED 26 billion, enabling us to invest our own funds on other infrastructure projects. In line with the UAE’s commitment to promote green financing, and as part of the third pillar of the Dubai Clean Energy Strategy 2050, the AED100 billion Dubai Green Fund was launched to provide innovative financing solutions to green projects. DEWA partnered with National Bonds to launch the first green fund aggregating AED2.4 billion, with a dedicated arm for Sharia-compliant investments,” said Al Tayer.

“DEWA will disrupt the business of public utilities by becoming the world’s first digital utility using autonomous systems for renewable-energy and its storage, increasing its use of AI, and delivering digital services. Recently, we launched Digital DEWA, the digital arm of DEWA, to implement a pioneering new model for utilities using innovation in renewable energy, energy storage, artificial intelligence and digital services. DEWA encourages Research & Development (R&D) in solar power. We are currently building an R&D Centre at the Mohammed bin Rashid Al Maktoum Solar Park. The Centre focuses on four key operations. These include producing electricity using solar power, integration of smart grids, energy efficiency, and water, with investments totalling AED500 million by 2020. The infrastructure includes indoor laboratories, to study and test the reliability of systems, while outdoor laboratories conduct field tests and studies on mitigating the effects of dust on the performance of solar panels. This is part of DEWA’s efforts to promote efficiency and reduce operating costs, in addition to testing CSP technologies.”

“God has blessed us with a region that enjoys sunshine every day. That’s why, taking advantage of this is a strategic necessity. DEWA will continue working on anticipating and shaping the future of energy, by innovating a model for future utilities and building more clean and renewable energy projects. I am confident that this workshop will have significant results that contribute to promoting the CSP sector in the region and around the world,” concluded Al Tayer.

“This workshop focuses on CSP Markets, System Value & Financing, but the agenda is much bigger and more ambitious than just CSP project planning. In addition to showcasing new developments, the workshop continues to strengthen the MENA network of policy makers and utility officials working to integrate renewables into their power markets. It reflects the accelerating pace of energy transition in the Middle East and North Africa and the desire to develop a whole range of clean and competitive clean energy solutions to underpin economic growth. DEWA has proven time and time again its ability to innovate and lead both in technology early adoption as well as scaling up project development with remarkable operational effectiveness and efficiency,” said Fernstrom.

The meeting discussed DEWA’s experiences in getting the lowest prices globally for solar power projects, the Shams Dubai initiative launched by DEWA to encourage building owners to install photovoltaic systems and connect them with DEWA’s grid, DEWA’s initiatives to enhance energy efficiency and sustainability, and DEWA’s establishment of Etihad Energy Services (Etihad ESCO) to enhance investment opportunities in the retrofit market in Dubai. Work is underway to retrofit 30,000 existing buildings across Dubai.