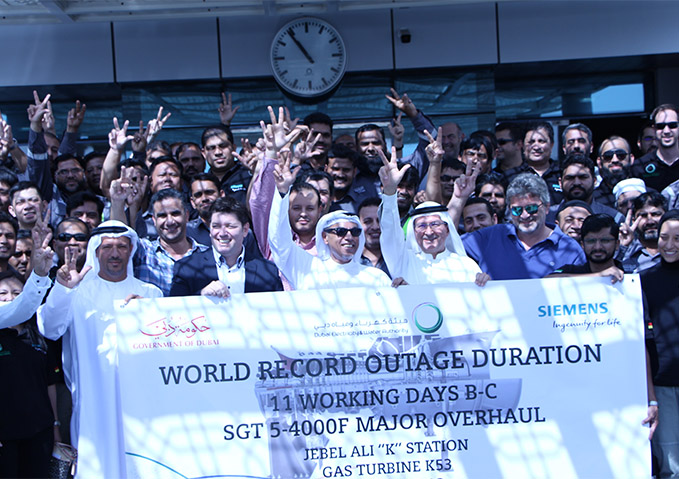 DEWA succeeded the completion of its major inspection outage within 11 working days compared to 30 working days previously. This allows a 63% reduction in outage duration, leading to increased availability of its gas turbines.

“This meets the directives of His Highness Sheikh Mohammed bin Rashid Al Maktoum, Vice President and Prime Minister of the UAE and Ruler of Dubai, to continue the path towards excellence and being first in everything. We aim to continuously develop our programmes, plans, and projects to strengthen our competitive position globally level to achieve the highest reliability, efficiency, and savings in operational and maintenance expenditure. This helps us to achieve comprehensive sustainability in line with the themes of the UAE Vision 2021 for the UAE to be one of the best countries in the world by 2021, and the Dubai Plan 2021, to provide the best government services. DEWA set a plan to record this achievement in 2016, when it formed a team to break the world record in outage duration of the largest and most efficient power and water producing gas turbines in DEWA’s fleet,” said HE Saeed Mohammed Al Tayer, MD & CEO of DEWA.

“These gas turbines, along with the steam turbines in the same train, provide 63.2% of DEWA’s gas plant power generation capacity, and 55% of the total thermal energy needed to produce desalinated water that DEWA provides to Dubai. This shows the strategic importance of the project to DEWA. In order to ensure its success, a Project Charter was initiated with a clear vision and strategic objectives in line with DEWA’s vision of being a globally leading sustainable innovative corporation,” said Al Tayer.

The project’s objectives were to strengthen and highlight Dubai's position as a leader in technological transformation. There are a total of 461 similar units worldwide, with 46 in the UAE. The lessons learned from DEWA’s achievement helped global users to use these turbines as a benchmark to improve their operating costs and availability of their services, and improve their environmental footprint.

“Using various innovative ideas and techniques, a team comprised of over 200 members, including 176 field staff, succeeded in reducing the major inspection outage of the unit GTK53 at K Station in October 2018 to 11 working days, breaking the previous world record of 20 days. To affirm the project’s sustainability, the same period was achieved on the unit GTK52 at K Station in April 2019,” said Nasser Lootah, Executive Vice President of Generation at DEWA.

Since the project’s success, the major inspection outage period over the next 12 years is expected to result in an increase in the availability of high-efficiency units and use by 756 days. In addition, DEWA managed to reduce carbon dioxide emissions by 394,632 tonnes in a year, equivalent to 18.13 million trees.