Dubai to host the Largest International Congress on Water Desalination 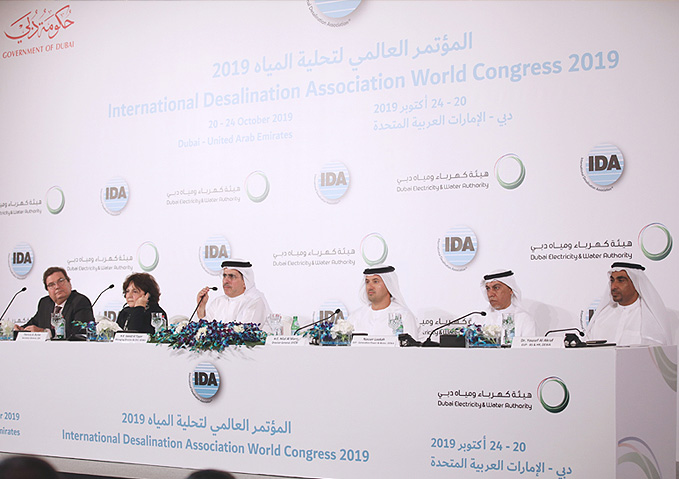 Dubai Electricity and Water Authority (DEWA) announced that Dubai will host the International Desalination Association’s 2019 World Congress on water Desalination. Previously, the congress was held in Dubai in 2009. This global event is the world  largest and the most prominent conference on water desalination specialty areas. It will be attended by leaders, senior officials, experts, and academics, as well as 2,000 participants from 60 countries around the world.

The event was announced at a press conference at the Burj Al Arab hotel in Dubai, in the presence of HE Saeed Mohammed Al Tayer, MD & CEO of DEWA, and HE Helal Saeed Al Marri, Director General of the Dubai Department of Tourism and Commerce Marketing, Ms. Patricia Burke, Secretary General of the International Desalination Association (IDA), senior officials  from the public and private sectors, EVP’s, VP’s from DEWA and the media.

HE Saeed Mohammed Al Tayer, during his speech at the conference, expressed his pride in the UAE's success in hosting the World Congress on Water Desalination 2019, which was the culmination of a series of major international events successfully hosted by the UAE.

“Yesterday, the UAE won the bid to host the 71st International Astronautical Congress in 2020, the largest of its kind in the world. This will also be the first such Congress in the region. Today, we also announce the UAE’s success in hosting the World Congress on Water Desalination 2019. On this occasion, I am honoured  to extend my warmest congratulations to His Highness Sheikh Khalifa bin Zayed Al Nahyan, President of the UAE, and His Highness Sheikh Mohammed bin Rashid Al Maktoum, Vice President and Prime Minister of the UAE and Ruler of Dubai, and His Highness Sheikh Mohammed bin Zayed Al Nahyan, Crown Prince of Abu Dhabi and Deputy Supreme Commander of the UAE Armed Forces, for the achievements and successes of our nation, to encourage a sustainable future, instil the UAE’s global competitiveness, and achieve both happiness and a brighter future for us all.

Dubai's success in hosting this important conference came as a result of the fruitful cooperation between DEWA, and the Department of Tourism and Commerce Marketing in the preparation of the proposal to host the event. Dubai was selected by the IDA after careful review of its profile, which surpassing international cities, such as Barcelona in Spain, Busan in South Korea, and Muscat in Oman. The IDA has received nominations from eight countries, including Canada, South Africa, India, and Malta, in addition to the above-mentioned countries.

The conference will be held in 2019, coinciding with the 21st Water, Energy, Technology and Environment Exhibition (WETEX), which will be held under the directives of HH Sheikh Mohammed bin Rashid Al Maktoum, Vice President and Prime Minister of the UAE and Ruler of Dubai, and under the patronage of HH Sheikh Hamdan bin Rashid Al Maktoum, Deputy Ruler of Dubai, Minister of Finance and President of DEWA.

“We support the vision of His Highness Sheikh Mohammed bin Rashid Al Maktoum, Vice President and Prime Minister of the UAE and Ruler of Dubai, who has taken the lead in promoting Dubai's position as the world's primary destination for conferences and exhibitions. The conference is the largest of its kind, and will include the participation of leaders, senior officials, and academics who specialise in water desalination, as well as over 2,600 participants from 60 countries worldwide,” said Al Tayer.

“To implement the directives of our wise leadership, who have put innovation and preparing for the future, and sustainability as key strategic priorities, and to support the UAE Vision 2021, and the objectives of the Dubai Plan 2021, Dubai has, over the past few years, advanced its regional and global position, by launching pioneering projects, initiatives, and action plans in clean energy. It has also devised innovative and efficient methods and techniques to enhance energy efficiency, and rationalise the consumption of natural resources. This supports the Dubai Clean Energy Strategy 2050, launched by His Highness Sheikh Mohammed bin Rashid Al Maktoum, to transform the Emirate into a global centre for clean energy and green economy and increase clean energy’s share in Dubai’s total power output to 7% by 2020, 25% by 2030, and 75% by 2050. DEWA is keen to host this global conference. Accordingly, we have launched several projects and initiatives to improve efficiency and reduce carbon emissions, directly contributing to water desalination. We aim to make Dubai the world's lowest carbon footprint by 2050, and achieve the Demand Side Management Strategy to reduce energy and water demand by 30% by 2030, and the Carbon Abatement Strategy to reduce carbon emissions by 16% by 2021,” added Al Tayer.

“I would like to take this opportunity to highlight our continuous efforts with the IDA for the success of this global event. We have a shared vision to promote energy efficiency, sustainability and environmental responsibility through the development and use of innovative desalination technologies. This shared vision supports the Sustainable Development Goals of the United Nations, including ‘Clean Water and Sanitation.’ Our government believes that water is one of the most fundamental human rights and is an essential component of development. There will also be a number of benefits from this conference, including discovering international expertise in vital areas such as the desalination industry, accessing new projects that will be presented during the conference in the study of water and its desalination and research. This includes ones that have been implemented or are being implemented, and meeting international experts in electricity, water and clean energy. In addition, it will present DEWA’s initiatives in water desalination and clean energy, and disseminate it to society, to achieve the objectives of the IDA. This is an opportunity for DEWA to talk about Dubai's efforts in water conservation, development, sustainability, and energy. We hope that both our efforts will make this conference an ideal global platform for discussing and developing these issues and sharing expertise and world-class practices on them,” noted Al Tayer.

Al Tayer highlighted that DEWA is currently desalinating water in Dubai through Combined Cycle Co-Generation. This is an efficient process that uses using heat from the production of electricity for water desalination, using Multi-Stage Flash distillation. This produces 67% of its water without burning fuel. DEWA also uses Reverse Osmosis to desalinate water, a proven technology that is also used around the world, to manage the considerable power generated by clean energy. DEWA adopts a clear strategy to ensure that by 2030, 100% of desalinated water will be produced by a mix of clean energy that uses both renewable energy and waste heat. This will allow Dubai to exceed global targets for using clean energy to desalinate water. So, DEWA will be able to produce 750 million gallons of desalinated water per day by 2030, compared to our current capacity of 470 million gallons per day.

“DEWA has also launched an innovative initiative to study the possibility of injecting and storing desalinated water within subterranean water basins and being able to pump it back into the water network when needed. The project is based on the latest innovative technologies to achieve operational efficiency in the water network. Studies have shown that it is possible to store 5,100 million gallons of water that can be retrieved when needed. This technology is more cost-effective than the conventional way of storing water in concrete reservoirs. In conclusion, I would like to thank you all for your presence, and your commendable efforts to enhance Dubai's status as a global destination for tourism and conferences. We value your daily quest to communicate our vision to the local community, and the world. We look forward to your participation in the coverage of the IDA World Congress on water Desalination, in 2019,” concluded Al Tayer.

The IDA, the organiser of the conference, is based in Topsfield, Massachusetts, USA. It is a non-profit organisation within the United Nations NGO Network, comprising of scientists, engineers, consultants, and researchers from the public and private sectors, as well as academic institutions. IDA World Congress 2017 will be in São Paulo, Brazil, from 15 to 20 October 2017.