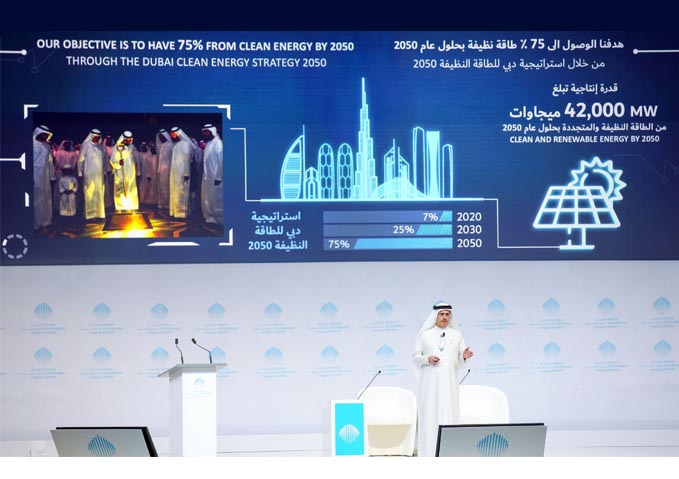 HE Saeed Mohammed Al Tayer, MD & CEO of Dubai Electricity and Water Authority (DEWA) has delivered a speech titled, ‘Our journey towards the future,’ on the third day of the World Government Summit in Dubai 2018. Al Tayer talked about DEWA’s experience in anticipating and shaping the future of energy, by innovating a model for future utilities in the production, transmission, and distribution of electricity and water.

“At DEWA, we work under the directives of our wise leadership on our ambitious initiatives and development projects. This supports the objectives of the UAE Centennial 2071, the UAE Vision 2021, and the Dubai Plan 2021 to secure a happy future and a better life for future generations, and elevate the UAE to become the best country in the world and always number one,’ said Al Tayer.

Al Tayer summarised DEWA’s key achievements, noting that its total assets are worth AED 144 billion, with investments over AED 81 billion for the next five years, to meet growing demand for electricity and water in the Emirate. This will provide significant investment opportunities. Today, DEWA has a strong infrastructure, which can generate 10,200MW of electricity and 470 million imperial gallons of desalinated water per day (MIGD) to meet the ever-increasing demand in Dubai.

“Our extensive efforts resulted in the UAE, represented by DEWA, ranking first globally for getting electricity, as per the World Bank’s Doing Business 2018 report. We also received over 170 prestigious local and international awards over the last three years. We made the world-class achievements with our electricity and water network. DEWA achieved the lowest Customer Minutes Lost per year (CML) in the world at 2.68 minutes, compared to 15 minutes recorded by leading utilities in the European Union and the USA. DEWA reduced losses in power transmission and distribution networks to 3.3%, and water network losses decreased to 7.1%, compared to 15% in North America. DEWA has succeeded in enhancing the efficiency of fuel use to approximately 90%, while improving production efficiency by 28.87% between 2006 and 2017. DEWA has implemented a number of innovative projects to increase its generation capacity and improve efficiency. These projects have increased generation capacity by 861 megawatts (MW) and achieved capital savings of AED 1.5 billion. Adoption of DEWA’s smart services reached 90%. DEWA recorded a customer happiness score of 97% in 2017,” noted Al Tayer.

“We have a clear strategy, the Dubai Clean Energy Strategy 2050, with specific objectives to generate 75% of Dubai’s total power output from clean energy by 2050. Meeting the clean energy objective requires a capacity of 42,000MW of clean and renewable energy by 2050. One of our most important projects is the Mohammed bin Rashid Al Maktoum Solar Park, with a total planned capacity of 5,000 megawatts (MW) by 2030 at a total investment of AED 50 billion. Upon completion, the solar park will help reduce over 6.5 million tonnes of carbon emissions per year. Our current photovoltaic and Concentrated Solar Power (CSP) Independent Power Producer- (IPP-) based projects’ capacity will exceed 1,700 MW. We will have an additional 3,300 MW, to reach 5,000 MW by 2030, making it the largest single-site solar park in the world,” said Al Tayer.

“We also have an interactive Innovation Centre, a Research and Development (R&D) Centre, and a centre for solar testing that’s equipped with the latest technologies in clean and renewable energy to boost the nation’s capabilities in these fields.  DEWA is committed to using the best global technologies in renewable energy. The R&D centre will focus on four key operations: Generating electricity from solar power, Integrating Smart Grids, Energy Efficiency, and Water. The centre includes indoor facilities such as the Electronics Laboratory, the Electrical and Mechanical Laboratory, and the Design and Simulation Laboratory. They will conduct research into environmental and optical testing, unmanned aerial vehicles (UAVs), energy efficiency (Supply & Demand), 3D printing and energy storage. There are many research projects being conducted on several innovative studies. In a pioneering move to use a mix of new energy sources to generate electricity, we made progress in the engineering studies for the hydroelectric pumped storage station that will make use of the water stored in the Hatta Dam. The project is the first of its kind in the Arabian Gulf, with a total capacity of 250MW. Launch of the first phase of an initial economic and technical feasibility study on the building of a 400MW power storage island, with a storage capacity of approximately 2,500MW/h. Research and testing on the use of robots include unmanned Aerial Vehicles (UAVs), research and testing in the manufacture of spare parts using 3D printing, testing dust soiling on solar panels and finding the best ways to reduce that impact, Testing over 30 types of solar panels and selecting the best ones for different projects, as well as other studies and research at the Mohammed bin Rashid Al Maktoum Solar Park. On this occasion, I would like to confirm that DEWA is organising the Solar Decathlon Middle East (SDME), in November 2018 at the Solar Park. An area of approximately 60,000 square metres has been allocated to the Solar Decathlon. 21 university teams from around the world have been shortlisted for the final phase of the competition to design, build, and operate sustainable, cost-and-energy-efficient solar-powered houses. The winning teams at the first round will be awarded cash prizes of over AED 10 million. Given the importance of the Mohammed bin Rashid Al Maktoum Solar Park in developing an economy that supports environmental sustainability and increases our supply of clean energy, Dubai has been chosen also to host the Solar Decathlon in 2020 to coincide with Dubai Expo 2020. I am delighted to announce that we have opened registration for the Solar Decathlon Middle East 2020 for all universities that wish to take part in this international competition,” said Al Tayer.

In regards to the second theme, which is the production of desalinated water from solar power, Al Tayer said, “DEWA’s mega projects have contributed to the reduction of the cost of electricity generation from solar power worldwide. DEWA has achieved outstanding global prices in this field. By 2030, DEWA intends to have 100% of its desalinated water production to come from a mix of clean energy that uses both renewable energy and waste heat. This will allow Dubai to exceed global targets to use clean energy to desalinate water. DEWA’s production capacity is expected to reach 305 million gallons of desalinated water per day by 2030. This means reverse osmosis will produce 41% compared to its current share of 5%. So, we will be able to produce 750 million gallons of desalinated water per day by 2030, compared to our current capacity of 470 million gallons per day. The increase in operational efficiency created by decoupling electricity generation and water desalination will lead to savings of up to AED 13 billion, and reduce 43 million tonnes of carbon emissions by 2030.”

Al Tayer then discussed the third pillar on ‘Disrupting the role of utilities by digitisation.’

“DEWA is guided in all its projects and initiatives by the vision of His Highness Sheikh Mohammed bin Rashid Al Maktoum, Vice President and Prime Minister of the UAE and Ruler of Dubai, to make Dubai a global model for clean energy and green economy and by using the disruptive technologies of the 4th industrial revolution disruptive technologies such as: Artificial Intelligence (AI), UAVs, energy storage, blockchain, the Internet of Things and many more. We support the 10X initiative launched by His Highness to propel Dubai towards the future, making it 10 years ahead of other global cities through government innovation. The work team over one year studied numerous ideas for the 10X initiative. At the end, we have decided to reshape the concept of utilities and create a new digital future for Dubai by launching ‘Digital DEWA,’ the digital arm of DEWA. DEWA will implement a pioneering new model for utilities that uses innovation in renewable energy, energy storage, artificial intelligence and digital services. This model will disrupt the entire business of public utilities by becoming the world’s first digital utility using autonomous systems for renewable-energy and its storage, expansion in AI adoption, and providing digital services.”

“Our 10X initiative will focus on four pillars to deliver a new utility experience for Dubai and the world. The first pillar is launching advanced solar energy technologies in Dubai, the second is deploying a renewable energy grid that utilises innovative energy storage technologies. This will make better use of the diversified clean energy mix, in line with Dubai Clean Energy Strategy 2050. In order to integrate this large share of renewables and storage, and to ensure maximum efficiency and reliability of operations, we will use advanced machine learning,” noted Al Tayer.

“This pillar also includes pilot projects on a 10-year energy storage system (ESS). We are currently working on the 7.2 MW/h Sodium Sulphur (NAS) Batteries by NGK, and evaluating 6.12 MWh Lithium Batteries, by LG Chem and Tesla. The third Pillar will expand on AI solutions to make Dubai the first city to provide AI-based on electricity and water services. The fourth pillar is to utilise connected technologies to provide 24/7 world-class service-delivery for Dubai. DEWA will launch a futuristic digital platform, a data hub named MORO, to improve the UAE’s digital capabilities to develop smart cities, provide state-of-the-art innovative solutions, and a successful model for Dubai and the world to benefit from our innovative approach. "

“In conclusion, I extend my sincere gratitude and appreciation to the World Government Summit, and its organisers, for the outstanding efforts of the Summit, and for allowing us to be part of the most important event for future governments,” said Al Tayer.