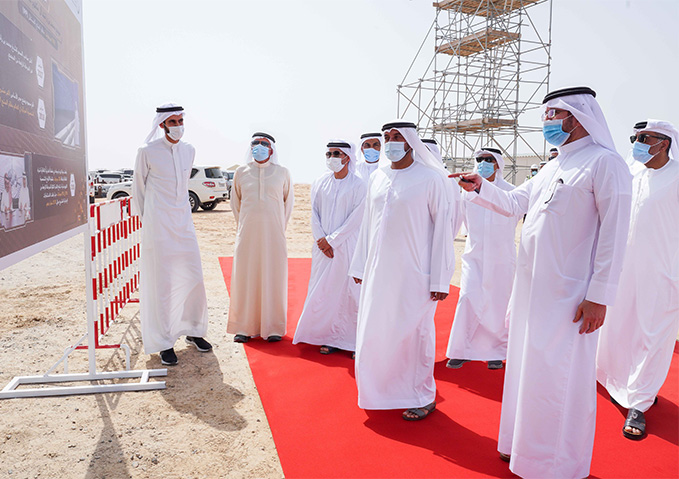 The CSP project is part of the 4th phase of the Mohammed bin Rashid Al Maktoum Solar Park. The 950MW 4th phase is based on the Independent Power Producer (IPP) model with investments totalling AED 15.78 billion.

His Highness Sheikh Ahmed bin Saeed Al Maktoum, accompanied by HE Al Tayer, checked the progress of construction of the 4th phase. HE Ahmed Buti Al Mehairibi, Secretary General of the Dubai Supreme Council of Energy, DEWA’s Executive Vice Presidents and other DEWA officials were present.

Abdul Hamid Al Muhaidib, Executive Managing Director of Noor Energy 1, briefed His Highness on the progress and installation of the MSR. Noor Energy 1 is owned by DEWA, the Silk Road Fund, which is owned by the Chinese Government and ACWA Power from Saudi Arabia.

“We congratulate His Highness Sheikh Mohammed bin Rashid Al Maktoum, Vice President and Prime Minister of the UAE and Ruler of Dubai, on this historic achievement for Dubai: the installation of the Molten Salt Receiver on the world’s tallest solar power tower, which stands at 262.44 metres tall and we seek to increase it, at the largest Concentrated Solar Power project in the world. This is part of the 4th phase of the Mohammed bin Rashid Al Maktoum Solar Park, with investments totalling AED 15.78 billion. This demonstrates the UAE’s leadership in the use of clean and renewable energy,” said Al Tayer.

“We promise His Highness Sheikh Mohammed bin Rashid Al Maktoum that we will continue to build clean and renewable energy projects, guided by his vision and directives to achieve the Dubai Clean Energy Strategy 2050’s objectives to provide 75% of Dubai’s total power output from clean energy by 2050,” he added.

Al Tayer thanked His Highness Sheikh Ahmed bin Saeed Al Maktoum for witnessing this major milestone, which underlines the UAE’s contribution to building the future of the world with environment-friendly solutions for sustainable development.

Al Tayer stated that the smoothness and continuity of construction work over the past period for this strategic project, despite the coronavirus pandemic. It has taken one and a half years to complete 60% of the CSP tower and without injuries. The concrete part of the solar power tower is now complete at a height of 222 metres. The MSR was built and assembled while the tower was being built.

“ACWA Power is proud to partner with DEWA and Silk Road Fund and support all efforts to make the Dubai Clean Energy Strategy 2050 a reality. Today, we reached another significant milestone in the world’s largest CSP plant, Noor Energy 1. We have completed the lifting of the Molten Salt Receiver in a record time, keeping the highest standards of safety despite the impact of the COVID-19 pandemic and many other challenges. This is yet another demonstration of ACWA Power’s commitment in to the solar industry and the endeavours made in the region to achieve a clean energy future,” said Mohammad Abunayyan, Chairman of ACWA Power.

The MSR is the centre and the most important part of the CSP plant. It receives solar radiation and turns it into thermal energy. Up to 50% of the overall project’s first phase has been completed. This includes the solar power tower, the parabolic basin complex, and the photovoltaic solar panels.

The fourth phase of the solar park combines CSP and photovoltaic technology and is rated for 950MW. It will use 700MW of CSP, 600MW from a parabolic basin complex, 100MW from the solar power tower and 250MW from photovoltaic solar panels. On its completion, the project will have the largest thermal storage capacity in the world of 15 hours, allowing for energy availability around the clock. The fourth phase will provide clean energy for 320,000 residences and will reduce 1.6 million tonnes of carbon emissions a year. This project covers 44 square kilometres and has broken many world records, including the lowest Levelised Cost of Electricity (LCOE) of USD 7.3 cents per kilowatt-hour (kW/h) for the 700MW CSP and USD 2.4 cents per kW/h for the 250MW photovoltaic solar panels.

The Mohammed bin Rashid Al Maktoum Solar Park is the largest single-site solar park in the world based on the IPP model, with a planned capacity of 5,000 MW by 2030 and investments of up to AED 50 billion. The 13MW photovoltaic first phase of the solar park became operational in 2013. The 200MW photovoltaic second phase was commissioned in March 2017. The photovoltaic third phase has a capacity of 800MW. A Power Purchase Agreement was signed in March 2020 for the 900MW photovoltaic fifth phase based on the IPP model. It will become operational in stages starting in the third quarter of 2021.