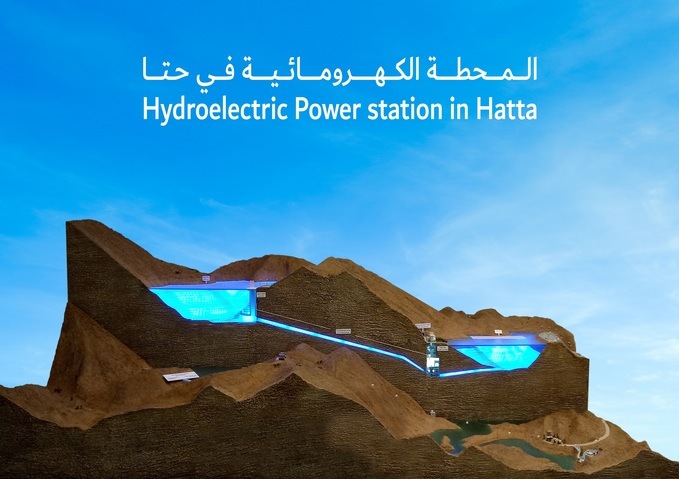 Dubai Electricity and Water Authority (DEWA) has announced that the work progress at Hatta hydroelectric power plant has reached 23%. The plant production capacity is set to reach 250 megawatts (MW) with a storage capacity of 1,500 megawatt hours and a lifespan of 80 years. The plant, which is the first of its kind in the Gulf region, has investments of around AED 1.421 billion.

“We work in line with the vision of His Highness Sheikh Mohammed bin Rashid Al Maktoum, Vice President and Prime Minister of the UAE and Ruler of Dubai, to achieve sustainable and comprehensive development across the Emirate of Dubai. The pumped-storage hydroelectric power plant at Hatta is part of our efforts to increase the share of clean and renewable energy in Dubai’s energy mix and contribute to promoting the Emirate’s position as a global hub for clean energy and green economy. It also enhances Hatta’s position as one of the most prominent tourist attractions in Dubai. This strategic project supports the Dubai Clean Energy Strategy 2050 to provide 75% of Dubai’s total power capacity from clean energy sources. The project is part of DEWA’s initiative to provide innovative job opportunities for the people of Hatta, in addition to developing the area to meet its social, economic, and environment needs,” said HE Saeed Mohammed Al Tayer, MD & CEO of DEWA.

Al Tayer confirmed that construction of the hydroelectric power plant uses the latest and safest drilling technologies to fit Hatta’s geological features while following the highest international environmental standards to protect the Hatta Natural Reserve. He noted that the service tunnelling operations were complete. Each tunnel is 500 metre long. The project has so far recorded more than 3.5 million safe working hours without injuries.

Al Tayer noted that DEWA is implementing two pioneering projects in Hatta; ‘Dubai Summit’ and ‘Hatta Sustainable Waterfalls.’ The ‘Dubai Summit’ project includes the construction of a 5.4 kilometre cable car to transport tourists to the summit of Um Al-Nesoor. At 1,300 metres above sea level, it is the highest natural summit in Dubai. The project is expected to be a major tourist attraction in the UAE. The cable car route passes over the Hatta Dam Lake and the Upper Dam Lake for the hydroelectric power station, as well as through mountains, ending at the summit of Um Al Nesoor mountain. The ‘Hatta Sustainable Waterfalls’ project will use the slope of the upper dam to create a natural waterfall. A waterway will be built along the parking area below the dam. The water used in the waterfall will be collected at the end of the stream, recycled and pumped back to the top of the dam. Fish bred in the stream will provide an additional attraction for tourists and families. The area will be developed to create recreational spaces and restaurants.

Nasser Lootah, Executive Vice President of Generation at DEWA, explained that the hydroelectric power station will use water in the Hatta dam and an upper reservoir that is being built in the mountain. The hydropower plant mechanism includes the use of advanced turbines that run on clean energy generated at the Mohammed bin Rashid Al Maktoum Solar Park, to pump water from the dam to the upper reservoir. Turbines operated by the speed of waterfall from the upper reservoir will be used to generate electricity through a 1.2 kilometre subterranean water canal, with high efficiency in power generation and storage of up to 78.9% and with a 90-second response to demand for electricity.