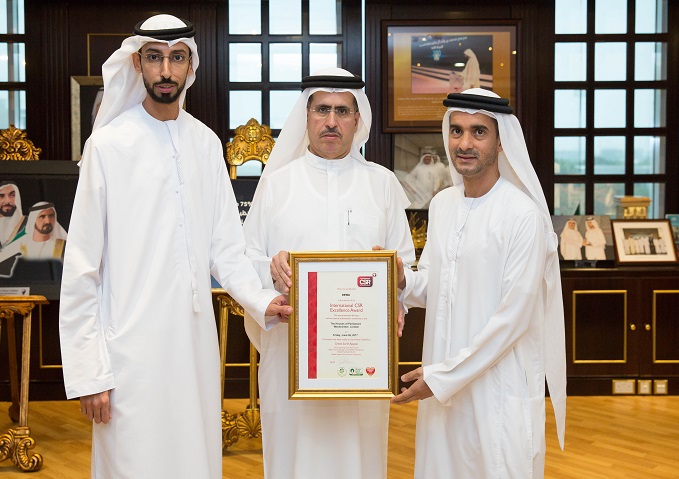 Dubai Electricity and Water Authority (DEWA) won three awards in the International Corporate Social Responsibility (CSR) Excellence Awards 2017. DEWA received the Gold Award in the Best Initiative category for its Emission Reduction Programme, the Silver Award in CSR for the DEWA Sustainability Report 2015, and the Bronze Award in Education for its Rationalisation campaigns. These awards highlight DEWA's leading position in community responsibility and promoting environmental, social and economic sustainability.

Mohammed Abdul Kareem Al Shamsi, Senior Director of Sustainability and Climate Change at DEWA received the award at a ceremony in the Houses of Parliament, London. More than 200 companies, around the world, participated in this award.

“DEWA adopts a clear strategy to establish and promote CSR, environmental protection, and the conservation of natural resources to achieve sustainable development. This supports the aspirations of our wise leadership and the vision of HH Sheikh Mohammed bin Rashid Al Maktoum, Vice President and Prime Minister of the UAE and Ruler of Dubai. The three awards highlight DEWA’s leading position in promoting sustainability and reducing carbon emissions. The International CSR Excellence Awards are also an excellent addition to DEWA’s list of achievements, through which we support international efforts to achieve comprehensive sustainability, and to further consolidate the concept of sustainability as an essential pillar and an integral part of the institutional strategy and culture of DEWA. This supports the UAE Vision 2021 to achieve environmental sustainability, and the objectives of Dubai Plan 2021 to make Dubai a smart, integrated, connected and sustainable city with clean, healthy and sustainable environment,” said HE Saeed Mohamed Al Tayer, MD & CEO of DEWA.

“DEWA’s Emission Reduction Programme is a unique programme in the region that sets short, medium and long-term emission reduction measures until 2030, taking into account the increasing demand for energy and water in Dubai, as well as Dubai’s conservation and rationalisation initiatives. From 2006 to 2016, DEWA’s energy production efficiency increased by 25.47%, which is equivalent to the reduction of 37.5 million tonnes of carbon dioxide emissions. This has been achieved through the optimized design of power plants, energy efficiency enhancement, gas turbines efficiency improvement, improved processes, and breakout planning. DEWA is one of the first utilities in the region to receive the ISO 14064-1 certification, in recognition of the system it has adopted in monitoring and reporting greenhouse gases,” added Al Tayer.

Al Tayer explained that DEWA adopts the highest international standards for the preparation of sustainability reports, and is keen on keeping abreast of the latest innovations in the field of sustainability and reporting, and building strategic relationships and partnerships with its global counterparts that share the goal of advancing sustainability in all its aspects and dimensions.

“Reaffirming its efforts to raise the bar of its corporate performance in sustainability, DEWA joined the Global Reporting Initiative’s (GRI) GOLD Community, which gathers organisations shaping the future of sustainability and reporting, and empowering decision making for a more sustainable economy around the world. DEWA has also been invited by the GRI to be part of the Standards Pioneers Programme, which gathers organisations from all over the world that have demonstrated leadership in Sustainability Reporting. DEWA is one of 100 organisations worldwide who will adhere to the new standard before it becomes mandatory for all organisations by the end of June 2018,” noted Al Tayer.

“DEWA’s excellence in the field of energy conservation comes as a result of extensive efforts. DEWA has given utmost importance to initiatives and programmes that raise awareness on the importance of rationalisation and conservation of natural resources, which demonstrated the extent to which all members of society can contribute to national and global efforts aimed at reducing the phenomena of climate change and global warming. Between 2009 and 2016, DEWA’s customers saved over 1.5 TW/h of electricity and 6.2 billion gallons of water, worth over AED 967 million. The generated savings resulted in offsetting around 831,000 tonnes of carbon emissions, which equates to planting 944,000 trees,” concluded Al Tayer.

The International CSR Excellence Award comprises 40 categories, in which a large number of government and private institutions worldwide compete each year to implement global standards and practices in sustainability and social responsibility, in addition to the launch of special initiatives on key challenges faced by companies in these areas.