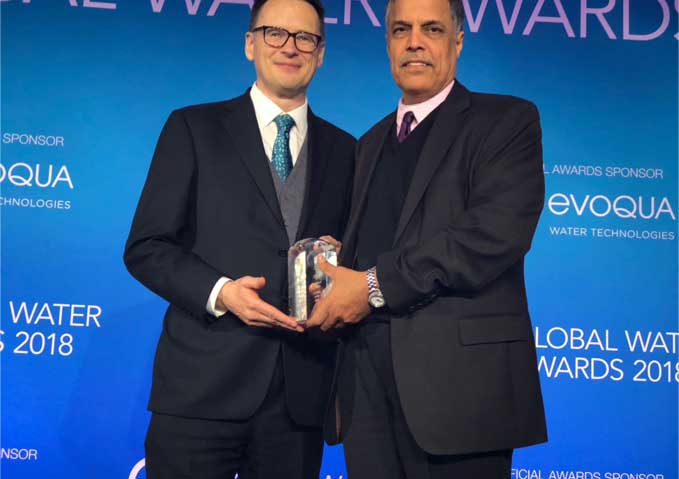 Dubai Electricity and Water Authority (DEWA) won the Smart Water Company Award of the Year at the Globl Water Awards, during a ceremony held at the Global Water Summit 2018. The Summit took place recently Paris, and was attended by over 650 experts, specialists and senior officials of public and private water companies and organisations around the world. Abdullah Obaidullah, Executive Vice President of Water and Civil at DEWA, received the award on behalf of HE Saeed Mohamed Al Tayer, MD & CEO of DEWA.

The award recognises DEWA’s efforts to implement one of the biggest advanced infrastructure projects for smart water meters in the world. DEWA succeeded in replacing 518,000 mechanical meters with smart meters in a record time, of which 300,000 are monitored and read every 15 minutes. This allowed DEWA to improve the availability of meter readings to 99.9%.

Al Tayer expressed his happiness for DEWA’s global recognition, among the leading and most advanced service providers in the world, for the smart transformation of its operations and services.

“Our plans and strategies are inspired by the vision of His Highness Sheikh Mohammed bin Rashid Al Maktoum, Vice President and Prime Minister of the UAE and Ruler of Dubai. At DEWA, we work under the directives of our wise leadership. This supports the objectives of the UAE Centennial 2071, the UAE Vision 2021, and the Dubai Plan 2021 to secure a happy future and a better life for future generations, and elevate the UAE to become the best country in the world. This prestigious award is one of the most outstanding achievements to be added to the DEWA’s list of local, regional and global achievements. The award highlights DEWA’s efforts that support the Smart Dubai initiative, launched by His Highness Sheikh Mohammed bin Rashid Al Maktoum, to make Dubai the smartest and happiest city in the world. DEWA launched its Smart Applications through Smart Meters and Grids initiative, to speed up service delivery and response. This ensures a quick reconnection in case of unplanned service interruption, while rationalising smart energy consumption by monitoring consumption details simultaneously at any time, using smart meters. This works to achieve society’s happiness, and to support the sustainability of resources,” said Al Tayer.

“The award is important due to its global recognition among the world's leading service providers. DEWA has demonstrated exceptional internal capabilities through the development and maintenance of advanced infrastructure of smart water meters, replacing fiber-based solutions with internally developed automated solutions, in addition to creating four operational data sheets for smart network management, contributing to savings of about AED 5.2 million. In addition, DEWA has succeeded in remote controlling built-in smart meters to identify and treat 12,000 water leaks, 3,600 faults and 800 overload cases, resulting in total savings of approximately AED 32 million,” said Obaidullah.