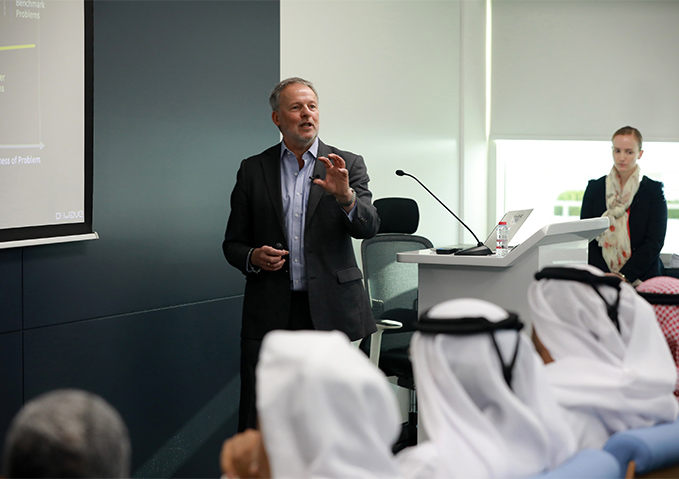 Dubai Electricity and Water Authority (DEWA) has organised intensive training sessions on quantum computing and programming in partnership with D-Wave. This is part of its strategy to employ the latest disruptive technologies and benefit from the capabilities of modern technologies. DEWA’s top management, employees and specialists attended the workshop at DEWA Academy.

At the 3-day workshop, participants learned about the latest quantum systems and applications developed and provided by D-Wave. They also learned new scientific skills in quantum programming and about open-source programmes such as Ocean SDK. The participants also identified the challenges of quantum programming which have more advanced features than current computers.

“DEWA works in accordance with the directives of His Highness Sheikh Mohammed bin Rashid Al Maktoum, Vice President and Prime Minister of the UAE and Ruler of Dubai, to make Dubai the smartest and happiest city in the world. DEWA’s strategies align with the nation’s plans and strategies, including the UAE Centennial 2071, which is a long-term government plan to prepare the UAE and young Emiratis for the future, and the National Strategy for Artificial Intelligence 2031, to position the UAE as a global leader in AI by 2031. In line with our vision to become a globally leading sustainable innovative corporation, we are aiding Dubai’s progress to lead the future. This is being done by reworking the traditional concepts of work mechanisms to suit the rapid changes taking place in the world and strengthening Dubai’s position as an incubator for creativity and a beacon of innovation. Our collaboration with D-Wave is part of our efforts to keep pace with the Fourth Industrial Revolution and benefit from disruptive technologies that advance government services and put proactive long-term plans. It also enhances DEWA’s role in anticipating and shaping the future of energy in order to achieve a happier, brighter, and more sustainable future, for generations to come,” said HE Saeed Mohammed Al Tayer, MD & CEO of DEWA.

“We are keen on benefiting from the huge potential of quantum computing in improving energy efficiency, reducing consumption, and enhancing Dubai’s infrastructure. Through Digital DEWA, the digital arm of DEWA, we redefine the concept of utilities to create a new digital future for Dubai. DEWA will disrupt the entire business of public utilities by becoming the world’s first digital utility to use autonomous systems for renewable energy and storage and expand the use of AI and providing digital services. This is part of the Dubai 10X initiative which propels Dubai into the future and make it 10 years ahead of other cities. DEWA organises workshops for its employees to learn about the latest quantum computing technologies and gain knowledge and skills in this field. It also enables them to develop instant solutions using quantum computing in improving energy efficiency and reducing consumption, amongst other challenges that cannot be resolved with ordinary computers,” added Al Tayer.

“We are keen on sharing knowledge and best practices with the most prominent national and international companies. We have several strategic partnerships with the most prominent tech-savvy companies in the world. Our partnership with D-Wave helps DEWA develop solutions that improve performance, productivity and enhance the quality of its services. This also ensures a seamless shift to the latest technologies after the propagation of quantum computers around the world,” said Marwan Bin Haidar, Executive Vice President of Innovation and the Future at DEWA.